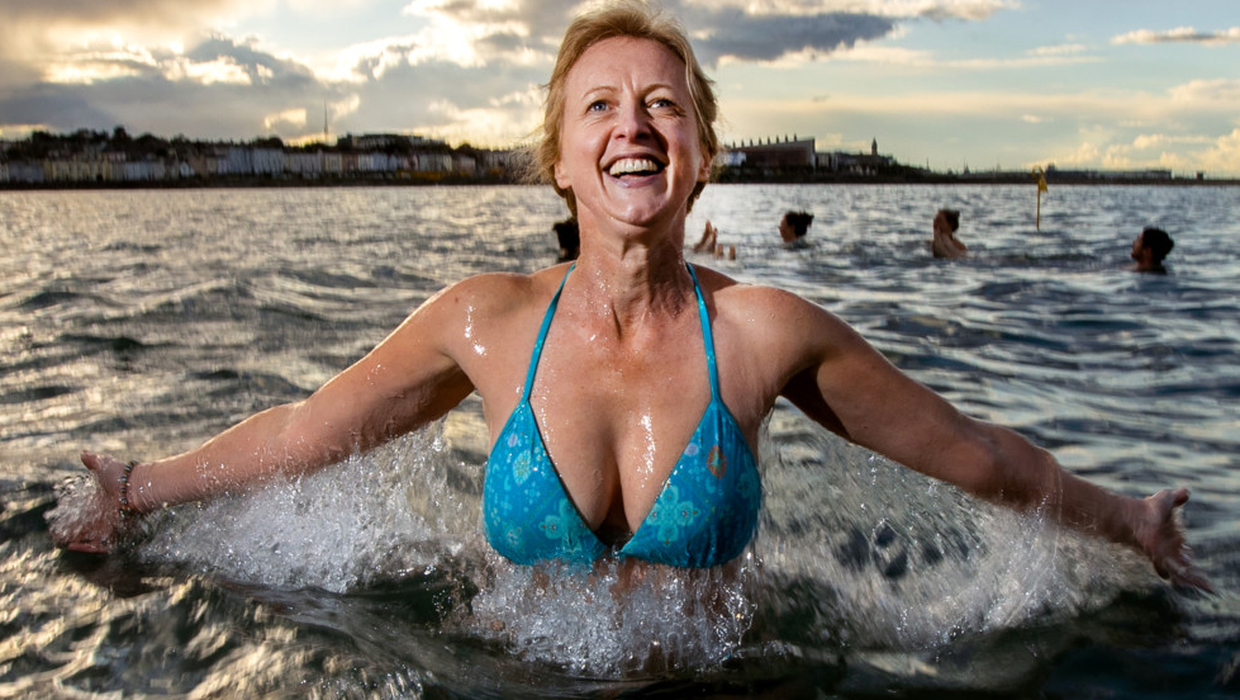 When Karen Sorensen moved from New York City to the Co Clare village of New Quay seven years ago, the long, dark wet winter evenings made the 47-year-old American wonder if the move had been a mistake.

hen she noticed a group of swimsuit-clad women – many of them over the age of 70 – who shrugged off whatever dismal weather the Atlantic delivered by immersing themselves in the chilly waters off the Flaggy Shore. The stretch of limestone coastline, immortalised in the Seamus Heaney poem Postscript, had inspired the 80-strong group to call themselves the Flaggy Shore Mermaids.

“At the start, I thought they were all crazy,” says Sorensen, who was on a swim team while growing up in Wisconsin. “But I’ve been swimming with them for a couple of years now. I enjoy it when the water is freezing and the sea is really rough: we all bob up and down in the waves like children.”

While sea-swimming was off-limits during national lockdown, the lifting of restrictions ushered in a boom in the pastime. Sorensen, like so many other coastal dwellers, began to swim every day, finding that the sea became a refuge from worries about how her family would cope during the pandemic.

“It’s been keeping me sane,” she says. “I get a huge sense of community and belonging from the group, especially when I’m so far away from my family in the States. And for mental and emotional health, it’s amazing: I feel more positive and more able to take on challenges. There are physical benefits, too – if I have sciatic pain in my hips or back, it goes away when I get in the sea.”

With the nation compelled to holiday at home and limits on attending public pools, this summer saw generations of Irish people either rediscover their childhood love for the sea or embrace sea-swimming for the first time. When Swim Ireland held its first outdoor swimming courses and events this summer, it attracted 1,000 participants.

Read More:  ‘I went out for a run, my next memory was waking up in hospital’

But as daylight hours dwindle, temperatures drop, and work and school commitments increase, these fresh converts to sea-swimming will need to be hardy to sustain a habit formed on balmy summer days. For instance, the Flaggy Shore Mermaids don’t wear wetsuits, even in winter.

Sorensen says: “I wear a winter hat over my swim cap and that keeps in some of the heat. It’s so cold in February and March that we usually stay in the water for less than 10 minutes; we leave our cars running and hop into the sea and jump back out into the car. I would just wear a robe on the way home and then jump into a hot shower, but a lot of the women do a brisk walk for 45 minutes to get the feeling back in their toes and fingers.”

In Eddie Walshe’s experience, groups of year-round swimmers are dominated by women.

“They’re hardcore,” says Walshe, a former beach lifeguard and competitive swimmer who is now a swim coach and surf instructor. Last month, he started giving lessons to a group of women who began swimming at White Strand in west Clare during the pandemic and who are determined to swim throughout the winter.

“The last day I was showing them how to body-surf on the waves, and I’ve also shown them how to go under the waves and use the ground to push themselves up.”

Novices who plan to continue going for a dip throughout the winter can acclimatise themselves to the cold but need to be aware of the risks of cold-water shock, which can cause a heart attack. It can also cause an involuntary gasp for breath that contributes to a feeling of panic, thereby increasing the chance of inhaling water directly into the lungs.

Walshe says: “If you don’t go in the sea often enough, you lose that tolerance to the cold. You can condition yourself to build yourself up to it – if you just jump in and do half an hour in the sea, you could get cold water shock.”

He recommends that anyone who continues swimming over the winter – rather than dipping into the sea – buy a wetsuit. “You have to listen to your own body and know your own limits,” he says. “I wouldn’t last five minutes in the water without a wetsuit, whereas some girls could last 20 minutes and be fine. With a wetsuit, you can stay in the water for up to two hours. But if you’ve never had one before, wear it around the house first – if you go to the beach and try to put on a new wetsuit, you could be trying for half an hour.”

Just how cold does it actually get? Well, water takes longer to warm up than the air over land, so sea temperatures are generally higher than those of the air during winter, with the reverse being true in summer.

Cold-water therapy has been lauded as a cure for everything from anxiety to autoimmune conditions. But research into exactly why open-water swimmers reap physical and mental benefits is still ongoing.

Tadhg MacIntyre, the University of Limerick course director for the masters in sport, exercise and performance psychology, is involved in research into how blue spaces -such as coasts, rivers and canals – can affect people’s well-being.

“The strongest evidence on sea-swimming is that it’s a preventative intervention for mental health disorders,” says MacIntyre, who also swims in the ocean.

“The other extraordinary side is that if someone goes to a pool or a gym, they can leave there without having a conversation. But outdoor exercise – especially open-water swimming – enthuses us towards others.”

While Clare Sands, who trained as a beach lifeguard, has found herself “addicted to the endorphins” that come with swimming all year around, she also is in awe of the “social benefits”.

Sands doesn’t wear a wetsuit in winter but picked up a “miraculous” tip from a 75-year-old fellow swimmer. “He told me to fill a hot-water bottle with lukewarm water and put it on your body after getting out of the sea.”

Over the last few months, Mary Sexton, a planner with the RTÉ Concert Orchestra who lives in Monkstown, has been joining the “steady stream of people” who swim at Seapoint, the Forty Foot or the Vico at sunrise. Sexton spent her Cork childhood summers doing water safety training around the coast but didn’t start winter swimming until last November.

“I dipped in, did 10 strokes, screamed and was then hooked,” she says. “It stops you spending so much time in your head and just brings you back to your body. It’s better than any drug – it feels like a therapy.

“When the sea is very cold and my feet are like ice blocks, I use a floor matt from the car to put underneath my feet. If you go with a group or with someone else, you might think you have to get in, even if the sea is choppier and rougher than what you are used to. I’m a good strong swimmer but there are times when I’ll decide it’s not safe to get in. The sea will always be there tomorrow.”