After blocking the lane towards Fouzdarhat on Monday following rain-triggered landslide on parts of the road, the CDA on Wednesday closed the road completely for three months.

The authorities cut 18 hills along the road to develop it even after being fined for damaging environment.

As they were cut at a 90-degree angle, the hills now also pose a great risk of landslide.

“This place has become a tourist spot. So we didn’t want to take chances. After closing one lane on Monday, we’ve closed the entire road to the public today (Wednesday),” said Kazi Hasan Bin Shams, chief engineer at CDA. 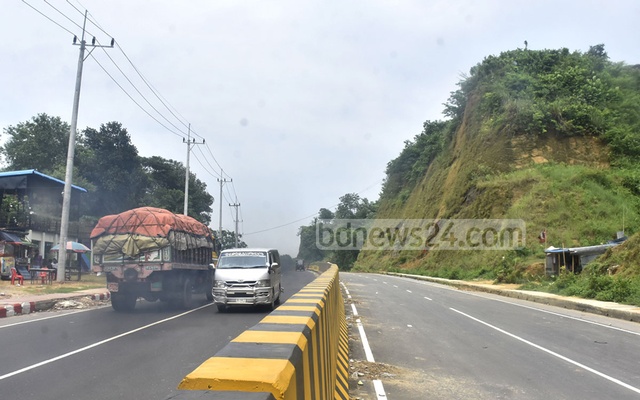 One of the two lanes of Bayezid Link Road in Chattogram is blocked after rains triggered a landslide from hills cut at a 90-degree angle. Photo: Suman Babu

The road was opened in September last year before its official inauguration as some work, such as construction of footbridges, remained unfinished.

The authorities in October last year sought permission from the Department of Environment to shave 200,000 cubic feet off the hills at a 45-degree angle and reduce the risk of landslide.

Hasan said they were making a report based on analysis by experts to cut the hills further. The CDA will also build retaining walls.

Once the project is complete, motorists can get to the Dhaka-Chattogram Highway from Kaptai, Rangamati, Hathazari, Rauzan and Rangunia without having to enter the port city.

Prime Minister Sheikh Hasina inaugurated the project implemented at an estimated cost of over Tk 1.72 billion in June, 2016.

The government later decided to make the road with four lanes instead of two, which inflated the cost to Tk 3.2 billon.

After serving two reminders in 2017, the DoE had fined the CDA Tk 1 million for causing environmental damage in implementing the project. 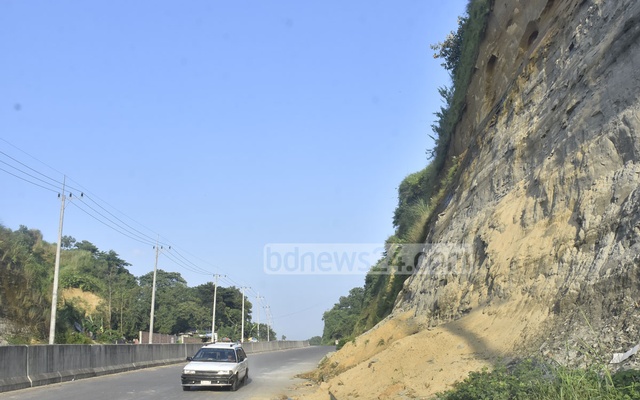 Cars take one lane of the road linking Faujdarhat with Bayezid Bostami in Chattogram although it is open to only goods-laden vehicles before the completion of the Tk 3.32 billion construction project. Photo: Suman Babu

The illegal hill-cutting, however, did not stop. As many as 18 hills were allegedly razed allegedly beyond the permitted levels under the project in Pahartoli, Jalalabad and Salimpur. Recently, the DoE declared eight of the hills risky.

In February 2020, the department fined the development agency over Tk 100 million for damaging the biodiversity, surface soil, and binding capacity of the hills by razing them.

It also flouted the hill-cutting management plan by razing the hills at an angle of 90 degrees.

During a visit in 2020, Environment, Forest and Climate Change Minister Md Shahab Uddin said he noticed that the constructors did not follow the rules on creating slopes while cutting hills.

Exploiting the restrictions on movement over the coronavirus outbreak, the encroachers have grabbed around 15 acres of land by cutting the hills further and constructed more than 400 illegal structure at different locations.

The district administration later cleared the places, but the encroachers are back now despite the risks of landslide.